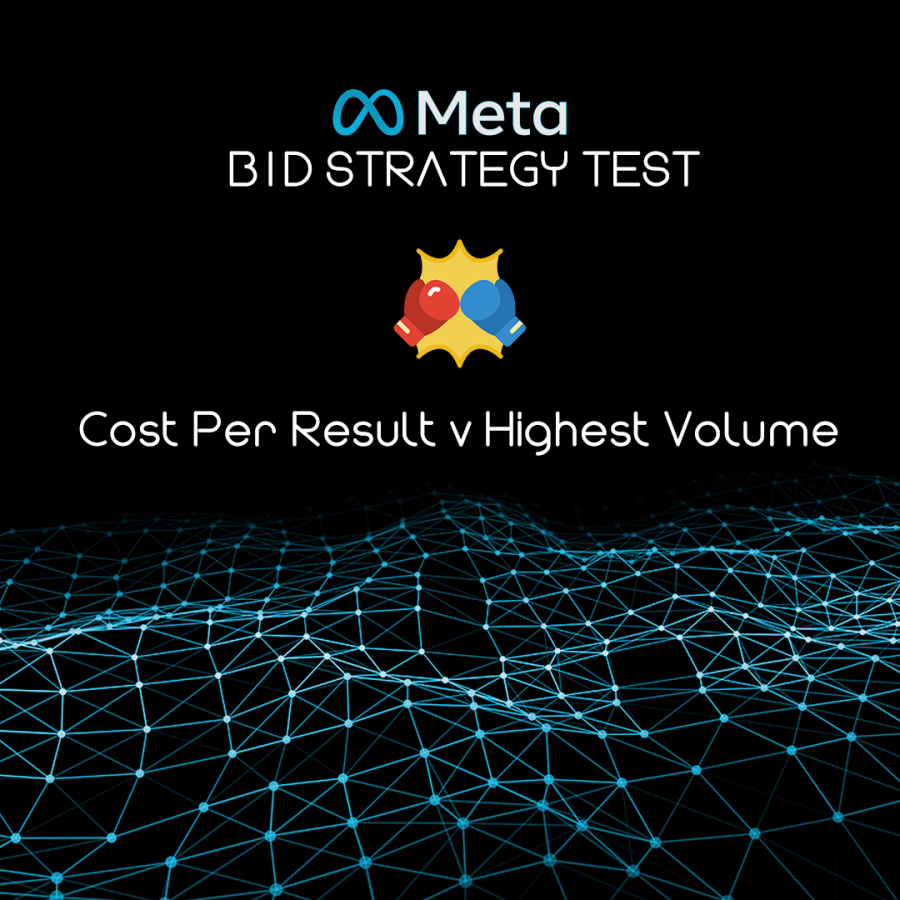 Every time you run an ad campaign on Facebook or Instagram, you’re entering an auction and competing on getting your ad on a user’s screen. How much you pay is simple supply & demand (along with other algorithm factors) based on how many advertisers are also trying to get in front of a 29 year old female based in Sydney who has an avid interest in fashion, puppies and basketball (for example).

One of the first steps in setting up your campaign, is to select a bid strategy.

Earlier this year, Meta decided to re-work and re-name their bid strategies for ad campaigns. Whilst there has always been the ability to manually select how FB/IG ads buys your inventory, this change simplified the categories they fall under – lowest cost, or controlled cost.

In May, we tested cost per result bidding versus highest volume of results bidding. The test was conducted across 8 clients in different industries. All campaigns were targeting a result falling under lead generation or ecommerce.

It goes without saying each industry and business has its unique challenges and campaigns within it will behave differently. Data has been given parity by applying interpolation and extrapolation to base volume metrics on an even $1,000 of spend. Whilst we have found some macro trends, please consider everything from your goal to your creative when considering what objective to use!

Every time someone opens Facebook, Instagram or any other owned and targeted placements, the ad inventory is an open auction for the advertisers trying to get their ad in front of that individual (based on many possible targeting mechanisms).

Cost per result (or cost capping) gives advertisers control on how much they’re willing to spend to achieve a result, over time, that all begins with the auction price for the impression. Whilst it can be quite volatile especially in a campaigns infancy, it should, theoretically balance out over time.

“Cost cap is one of Facebook’s bid strategy options, meaning that it tells us how to bid in the ad auction. The cost amount you provide is an average amount that we try to deliver against over the campaign lifetime, while dynamically bidding as high as needed to maximise results. This means that the average cost per result may exceed the set amount.”

Highest volume bidding aims to buy as much inventory as possible and spend the full budget. It doesn’t worry so much about if your results are efficient.

“Lowest cost is one of Facebook’s bid strategy options, meaning it tells us how to bid in the ad auction. When you use the lowest cost bid strategy, we’ll aim to get the most results possible from your budget.

For example, an event planner could use the lowest cost bid strategy to get as many people as possible to attend an upcoming music festival, where cost per attendance doesn’t matter.”